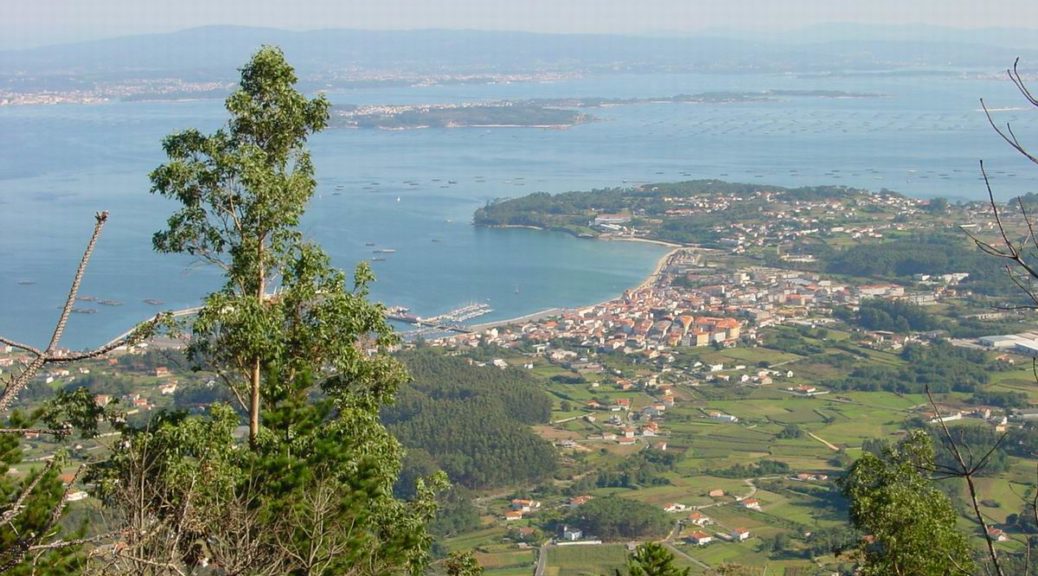 At this stage we walk through the Serra do Barbanza from Boiro to A Pobra do Caramiñal, in a very complete route in which we cross ancient roads that lead to ancient castles such as Vitres, which guarded the estuary of pirate incursions. We also visit beautiful natural corners such as the Pedras River, which falls encased among the rocks and we cross green pastures full of wild horses and with beautiful panoramic views over the Ría de Arousa.

Make your reservation for the GWF Rias Baixas Program

We begin the stage next to Barraña Beach, a beautiful sandy area where tourists sunbathe live with the women who work these sandy bottoms to extract the best seafood, the main way of subsistence of the population.

Thus we arrive at the mouth of the Coroño River, which reaches its last meters forming an estuary that is the habitat chosen by many birds and bivalves, such as cockle and clam, which are helped in their growth by the accumulated sediments of the entire route river. Around, a riverbank forest that we will walk while we contemplate the old boats, some of which only the skeleton remains after hard years of work.

We pass the bridge and arrive at the Mills of Goiáns, set of 3 rehabilitated mills that keep inside the stones used to grind the grain. We continue the ascent of the Coroño River through a chestnut forest until we reach the village of Brazos.

In Brazos is The House of Camellias, a private garden with 600 species of different plants and more than 1000 copies of camellia, a shrub that the weather conditions of the Rías Baixas give it to its maximum splendor. The garden also has a river and a mill in perfect working condition.

Before crossing the main road through a lower walkway, we see the Cruceiro de Galegos, From there begins the ascent to the Castelo de Vitres, in which in 4 kilometers we will pass from sea level to the 500 meters high that this summit of The Sierra de la Curota has.

When we pass the Rego do Cachopo we see small waterfalls and the remains of two mills. All these rivers that descend from La Curota have to overcome large slopes in a short space, which causes continuous waterfalls, present throughout the mountains.

After crossing the small village of Mosquete begins the Calzada de Vitres, which some studies identify as a derivation of the Via XX Per Maritime Loca of the Romans and that would cross the entire Barbanza on the way to Noia. Some parts of the road are perfectly preserved and others have suffered significant deterioration. As we ascend we see spectacular panoramic views of the Ría de Arousa and the rest of all the estuaries that we will walk.

Thus we arrived at Vitres Castle, where there are no remains of the old fortress, which had to be built like many other coastal fortresses between the 11th and 12th centuries because of the continuous invasions of normed pirates and Saracens. The construction, which is believed to be a square tower, would adapt to the terrain taking advantage of the different embankments for its defense. In its surroundings we can still see remnants of walls. From its 470 meters high, the visual control over the estuary is total.

Here the ascent ends and we get into the great pastures and forests of Mount Curota, where we will cross with herds of horses and wild cows, who live here in total freedom.

Thus we arrive at A Portela, crossing all the roads that run through the mountains. To get down to A Pobra do Caramiñal we choose the path that will take us down the Pedras River.

During medieval times, hermits individually or in groups forming a monastery, looked for the most remote places, in the middle of nature, which allowed them to perform their practices in the best way. Here we can see the Corte do Santo, former medieval hermitage today in ruins

The Curro de As Cañizadas is used by the locals to celebrate the popular “rapa”. During a weekend, all wild horses are grouped and taken to this fence. There the “aloitadores”, in an ancestral struggle, reduce the beast to cut off the mane, also taking advantage of the health control of the entire pack and marking the animals born that year. In recent years this activity is not celebrated.

From there we begin the vertiginous descent first through the San Xoán River, which forms in the mountains and precipitates down the granite slopes until it joins the Barbanza River in Misarela’s Bridge, thus forming the best known Pedras River.

This is the stage of the ruins, of the oldest thing we pass through, only vestiges remain, as is the case with the Convento da Misarela, a small 14th-century Franciscan hermitage. Its remoteness to the population, the isolation and exposure to the bandits that populated the mountains caused their abandonment and the transfer of the hermitages to the Monastery of Jofre.

Thus we arrive at the Pozas do Río Pedras, which are several natural pools that form at various heights in the riverbed. Although the environment is idyllic, you have to be very careful when walking, since the mother rock on which the pools sit is very polished and very slippery. In addition, any problem can be aggravated by being an area of difficult evacuation.

We continue the course of the Pedras River and arrive at Entrerríos, where the rural house and small winery Entre Os Ríos is located. Its owners came 40 years ago to buy wine in bulk, they did not buy it but they were left with a piece of paradise that they were gradually transforming to give it its own character.

Thus we arrive at the port at A Pobra do Caramiñal, end of stage. This well-kept fishing village with its promenade enjoys a great atmosphere in summer. The beaches of Cabío and Lombiña as well as Mount Curota have already aroused the admiration of our ancestors such as Valle-Inclán, who spent long periods in his pazos, including the area in many of his books.

The current municipality was formed in 1822 after the union of the two small towns that existed, Puebla del Deán and Caramiñal. In its urban structure two small historical centers can be distinguished, with their respective temples and stately pazos that were united by the buildings of the 19th century. After that union and the arrival of the salting factories, the town began a moment of industrial splendor, which continues to this day with important canning factories.

The Arenal Beach runs through the entire villa with a beautiful promenade where we can see the Monument to Working Women. At the end of the beach, a small marina where the boats of their voyages rest along the Ría de Arosa. And the fishing port, with typical boats that have long been the mainstay of its inhabitants. Opposite, the commercial dock that accommodates large draft ships.

We finish this stage by the Barbanza in any of the terraces of the Alameda and old area, where you can breathe very good atmosphere