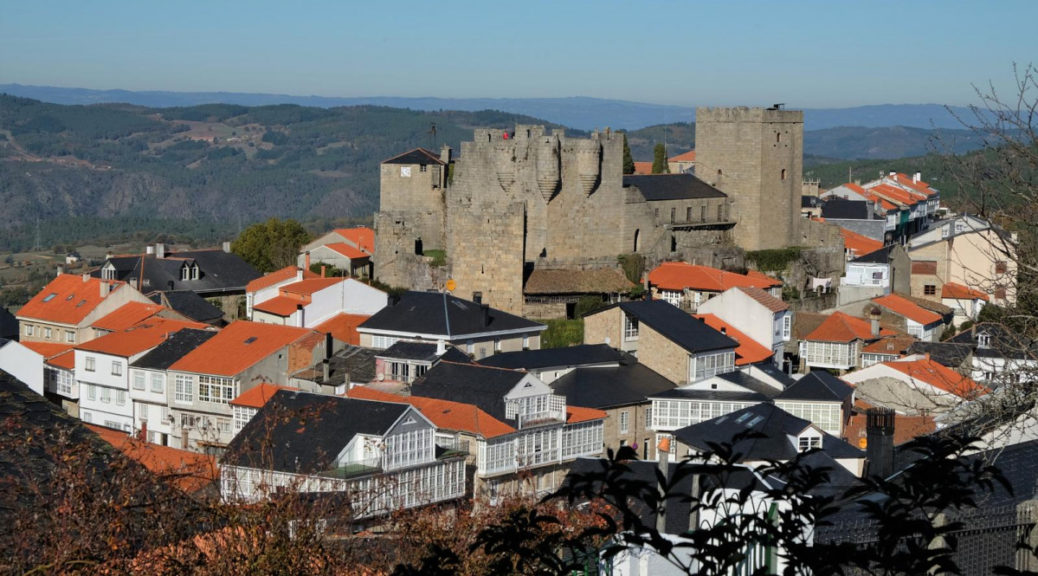 This stage brings us closer to the landscapes that surround Castro Caldelas. Enter a magical forest full of centuries-old chestnut trees, where water flows through all the places and where you will get to know all the natural and ethnographic heritage. Windmills that tell old stories, villages that keep all their essence, cobbled paths that lead us to “sequeiros” where the chestnuts are dried, monasteries, medieval bridges and a monumental castle once dried up complete this last stage by a Ribeira Sacra that will remain marked forever .

These Lemos lands have been populated since ancient times, as evidenced by several necropolis such as As Mamoiñas, 4500 years ago. In the Iron Age it is when the “castrexa” culture develops, being able to find remains of several castros and, possibly, Castro Caldelas sits on the remains of an old castro in the Cima de la Villa neighborhood.

In the 1st century BC, with the arrival of the Romans, there is evidence of the transit through here of the Via Nueva (Via XVIII) that linked Braga and Astorga and that had, in the village of Burgo, the Mansio Praesidium for accommodation of the travelers. The place name Castro Caldelas comes from castrum (fortified place) and calidus (hot springs or caldarias) and this crossroads caused military legions, officers and different orders to settle here.

From the fifth century, with the arrival of Suevos and Visigoths, Christianization begins and all the monasteries of the Ribeira Sacra emerge. In Castro Caldelas there were two: that of San Xoan de Camba and San Paio de Abeleda (both from the 10th century). In 1228 the Rei Afonso IX granted privileges to the town in the forum of the Bono Burgo de Caldelas.

In 1336 King Alfonso XI donates the town to Pedro Fernández de Castro, VII Count of Lemos, who orders the construction of Castro Caldelas Castle, since then being one of the main fiefdoms of the house of Lemos. Much of the castle was destroyed in the 15th century Irmandiñas Revolts, in which the peasant people revolted against the nobility throughout Galicia, destroying more than a hundred castles. During the Modern Age it will become a residential construction, being the protagonist in the War of Independence of a great fire caused by the French, which destroyed the existing documentation.

It is a medieval castle that stands out for its defensive character, perfectly adapted to the terrain and that retains a good part of its walls. The main door has a semicircular arch over which we can see the double shield of the Counts of Lemos. On the right the wolves of Osorio; to the left, the castle and the lion of Enriquez and the six roeles of Castro. Inside, the Tower of Homage, the oldest rectangular one, houses a permanent exhibition of the “Burgo de Caldelas” forum, and the Clock Tower preserves the old machinery of the 19th century. Around the courtyard of arms is the Ethnographic Museum of Castro Caldelas.

Let’s go back to the Middle Ages, a time of great prosperity for Castro Caldelas. Around the castle, in the neighborhood of Cima de Villa, where merchants, artisans of linen and an important Jewish colony settled. Stately stone houses with galleries in which we can see some shield while we walk through cobbled streets that preserve their medieval layout, declared a Historic-Artistic Site in 1998.

In Prado Square we finish this walk through the old town of Castro Caldelas to begin the route through its magical forests.

We leave Castro Caldelas and enter into its chestnut and oak forests that will accompany us throughout the day. After passing through the abandoned villages of Entrambasguas and Valverde, we arrive at the Capela de San Amaro, a simple stone and mortar construction.

We continue along the path stepping on the leaves and going through small races that make the stage very fun. Thus we arrive at the well-kept villages of O Couto and Soutelo, which we cross to reach the Caneiro’ mill, which used the force of the Edo River to move its machinery.

After passing a small bridge over the Sanxurxo River we arrive at the Monastery of San Paio de Abeleda, built in the 12th century and one of the most important monastic centers of Ribeira Sacra. He is currently in a dilapidated state. From what is maintained we can see some rooms from the 16th to 18th centuries and an interesting ogival door to enter the cloister, in the Gothic style and dated to the 14th century, on which an image of the Pantocrator appears.

The Romanesque church is also in poor condition. With a Latin cross plan and rectangular headboard, it retains the remains of mural paintings and capitals with zoomorphic and vegetable motifs.

We continue along A Touza and arrive at O Pacio, which we cross through its main slate house street, among which the rectory house stands out. In the middle of town there is a fountain where we can fill water.

The path takes us to an old bridge with a single arch and from there a beautiful walk brings us closer to the Fervenzas de Cachón, a beautiful waterfall with lots of water that takes advantage of the slope of the river and its strength to delight us with a show for all senses.

We return to the path and cross the villages of Paradella and Ruxil before arriving at the Church of Santa Tegra, built in the 18th century and which keeps interesting altarpieces and an image of the Virgen de la Luz. In his honor the Festa da Luz is celebrated in August, a procession full of joy and traditional music.

A few meters later, in the village of O Souto, we can visit an architectural complex of great ethnographic value, small wineries to store and produce the wine of this Abeleda valley.

After passing through Castomás we enter the magical forests of Souto de Poboeiros, which has large chestnut trees. Step by step and without realizing it, we arrived again at Praza do Prado, in Castro Caldelas, the end of this first part of the stage.

The second part, also circular, takes us first to the Monastery of San Xoan de Camba, one of the oldest in Galicia since documents appear since 963. It was a mixed monastery (men and women) until it began its decline in the thirteenth century The church we see today was built between the 16th and 18th centuries and consists of a single Baroque nave. On the facade we can see the image of San Juan Bautista and, on the left, the bell tower. Inside, the main altarpiece and the Renaissance processional cross stand out. From the old monastery an ajimez with interesting reliefs is preserved in the Archaeological Museum of Ourense.

We continue our route taking the detour that takes us to Pozo dos Cabalos, where a small dam retains the water of the Edo river and, with the water of the Fervenza da Caroceira falling, forms a beautiful waterfall in a natural environment.

The place name Caldelas is due to the hot springs that exist in these lands. One of the examples is the Piñeira Fountain, whose sulphured mineral-medicinal waters were declared of public utility in 1892, being indicated for digestive system processes, skin diseases and rheumatic pains. Water flows from the circular fountain with a strong smell of rotten eggs.

Continuing along the Edo River we reach the Táboas Bridge, an extensive recreational area that has several river pools, stone tables, a playground and a bar-restaurant where you can make a stop.

There begins the Edo River Path, a beautiful walk along the riverside full of vegetation with the continuous sound of the waters and many places to stop and breathe. Taking advantage of this force of water, several mills appear, such as the Ponte Mill, built on the sides of a small stone bridge.

The path along the river ends at Laberco’s Mill, which has been recently restored to show how these devices worked, so basic for the survival of our ancestors. The system is basic, the water is channeled and thrown with force against the rubble on which the wheel that grinds the cereal turns.

We enter through Castro Caldelas and visit the Sanctuary of Virxe dos Remedios, a 16th-century Renaissance church with subsequent reforms and which gives us a wonderful panorama from its atrium.

And so, in the Prado Square, in the center of Castro Caldelas, our stage ends through magical forests full of heritage and ethnographic elements that tell us step by step the history of this municipality

Any cookies that may not be particularly necessary for the website to function and is used specifically to collect user personal data via analytics, ads, other embedded contents are termed as non-necessary cookies. It is mandatory to procure user consent prior to running these cookies on your website.