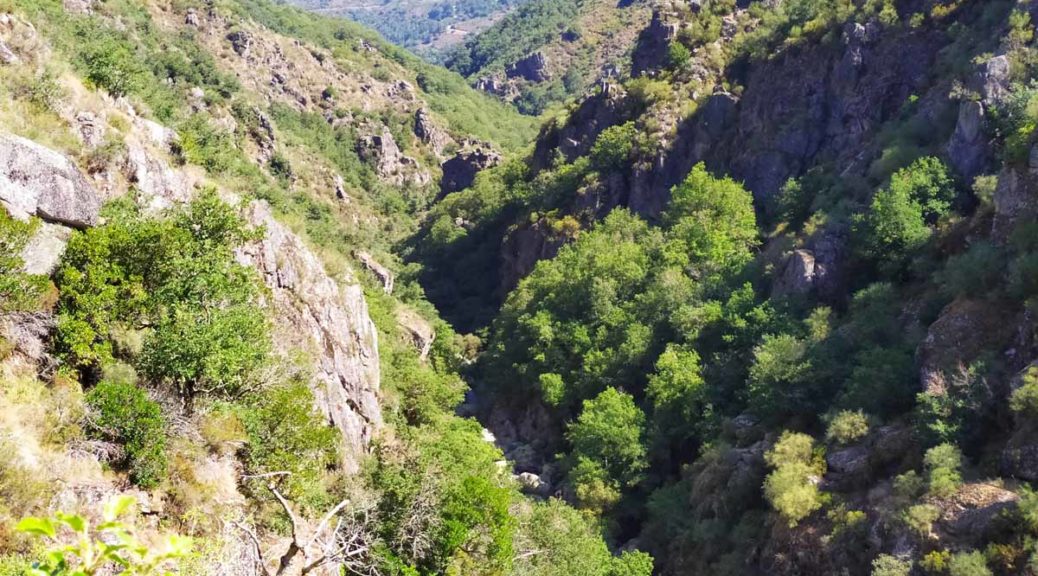 This stage begins at Fábrica da Luz, a former hydroelectric power station and one of the oldest in Galicia, which was a great advance in its time and served to give electricity to this entire area of the Ribeira Sacra. In a stretch of continuous ascent we will reach San Lourenzo de Barxacova and its medieval necropolis, with tombs carved into the same rock. Through forests of oaks and chestnut trees, we reach the Sil River again. In the last section we will ascend through a wooden walkway the entire canyon of the Mao river. At the end point a cold beer will be waiting for us.

This circular stage has as its beginning and end the A Fábrica da Luz, one of the first hydroelectric plants built in Galicia and a prodigy of technology of its time, taking advantage of the physical characteristics of this canyon of the Mao River. Between 1914 and 1916 the Canle Vello was built that channeled the water coming from the upper part of the river to discharge it from high altitude through pipes and produce electricity, which supplied Monforte and other villages in the upper part of the Ribeira Sacra .

At present, Gas Natural Fenosa has ceded its exploitation for tourism purposes and that old ship has been restored and converted into a hostel and canteen, where you can spend a few days surrounded by an explosion of nature. The hostel is located in the old employees’ homes, the canteen in several heights occupies the space of the old tower where the transformers were located and, where the old turbines were located, it has been converted into a large multipurpose room.

The beginning of the stage is the hardest part of the day and it takes us for two kilometers in permanent ascent through varied forests to San Lorenzo de Barxacova, from where we have a wide panorama of the Sil canyon.

We cross San Lorenzo along its main street until we reach the point that marks the deviation of the circular route, which we decided to take by taking the turnoff to the left that will take us to the medieval necropolis of San Vitor de Barxacova. It was known that in San Vitor there was a missing chapel in the nineteenth century and the remains of several graves, but what was found when excavating in 2010 was this ancient medieval necropolis, dated between the ninth and tenth centuries A.D. and one of the most important in the peninsular northwest.

It has more than 40 anthropomorphic tombs excavated in the rock, oriented from east to west and spread over several totally differentiated sectors. In the northern sector there is a better preparation of soil and tombs in a more orderly arrangement. They are supposed to be graves used by several members of the same family. In some of them you can still see how the caps fit. In the southern sector, the tombs no longer have an arrangement and are arranged on the slope of the rock.

On the other side of the esplanade, on a large rock and with a wide panoramic view over the canyon of the Mao River, was the chapel of San Vitor, which disappeared in the mid-nineteenth century and was accessed by steps. Around this rock there are four other tombs, which are supposed to have a higher rank within the population.

In the same necropolis we can also see an old mold to build the bells in-situ by the master craftsmen. All this set, perfectly conditioned and interpreted with panels, gives us an idea of how our ancestors were organized before the arrival of the parish organization in the 12th century and, even, long ago, since it is located in an old path. In addition, very close to the place was the sword of Forcas, of the bronze age, and in the same enclosure of the necropolis appeared other Roman tiles.

From San Vitor we enter the Mao river canyon, which we will enjoy on a mid-slope taking advantage of the groove built by the Canle Vello (Old Canal), an engineering work that, at the time, gave work to many people in the area. We will walk inside the canal itself, reinforced with large walls and surrounded by moss and lush vegetation. We really like the stages that tell you a story and this is, without a doubt, one of them.

Following the Old Canal we reached its supply point, where it took the waters of the Mao River. And, a little higher, we reach the Canle Novo (New Canal), a channel built in which takes the waters of the nearby Mao Dam to direct them at a height of 750 meters and then drop them, through tubes, at the hydroelectric power station of Regueiro, on the banks of the Sil. Very close, taking a small bypass of just 500 meters, we arrive at Ponte dos Conceliños, key point to understand what we have walked. The exact date of its construction is unknown, but we do know that it was the main access from the lands of Montederramo to this fertile valley of the Sil and a communication route between its monasteries. The bridge is immersed in a beautiful natural landscape where we can also see the remains of the Patarela Mills. The sound of the rapids of the river with the tranquility that there is breathed invite a small rest.

A descent to the Sil that is a real enjoyment. Among the carriozas, surrounded by chestnut trees and oaks and with unbeatable panoramic views over the Sil River, we go down to San Lorenzo de Barxacova to close the circle had led us through the upper part of the Mao River. But the stage still has a lot to see and know.

From San Lorenzo we descend to the height of the river, among the steep socalcos of the vineyards of this Ribeira Sacra that, sometimes, are dotted by small and curious villages like O Pombar or Barxacova that enjoy and suffer from a unique place to live.

At the mouth of the Mao River in the Sil, we can see a small river beach. From there we will go up the river through the wooden walkways of the Mao River, which allow us to see in its fullness the flora and fauna of inhabiting this diverse valley, and that are bringing us closer to the end point of the route, A Fábrica da Luz.

Without a doubt, a spectacular stage, of which they like to walk, surrounded by nature and with a lot of history. One of the essentials of the Ribeira Sacra.