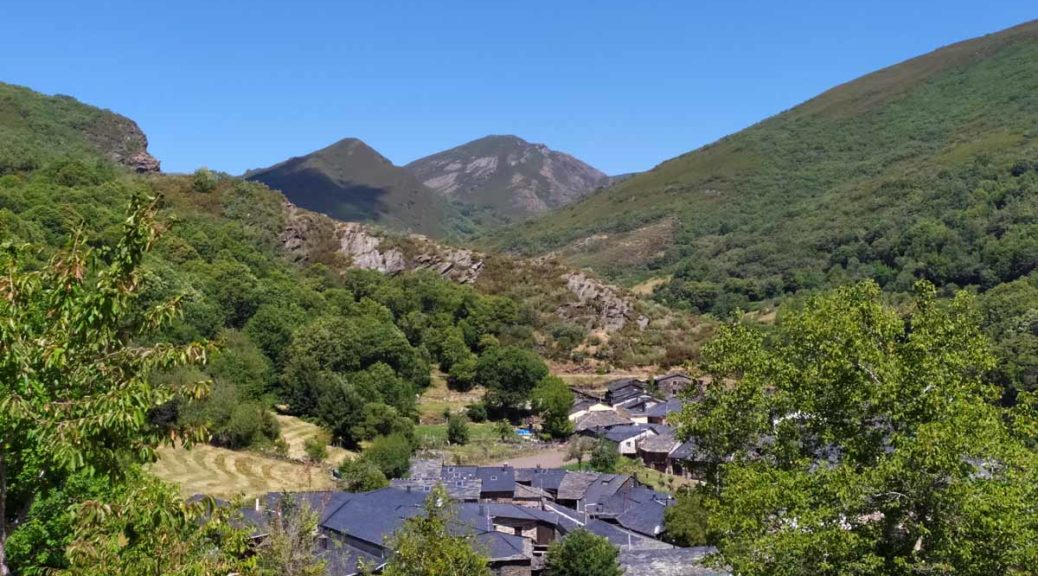 ROUTE A SEARA – ALTO DO COUTO

At this stage we go through the most historically isolated part of the Courel and strongly dependent on the iron provided by the Formigueiros mine. Along the way waterfalls such as Vieiros Waterfall and new villages such as Ferramulín and Visuña that are perfectly drawing the outline of what life is like in these lands. From Visuña we climb to the top of the Courel, Pico Formigueiros, with 1647 meters, from which we have a wide panorama of everything we have walked and how little we have left to finish the adventure.

Make your reservation for the GWF Courel Program

We begin this stage in the village of A Seara along the path that will take us to Vieiros and its waterfall, following the course of the Selmo River, a river that rises at the southern slopes of the Formigueiros at 1500 meters and which flows into the Sil, in the province of Leon. In its first kilometers of course, the river has to save several jumps that create beautiful waterfalls like the one we will see.

The village of Vieiros, located 942 m. high, it was practically abandoned at the end of the last century with a single neighbor. But lately, thanks to the efforts and efforts of young neighbors who returned to the village, the creation of an association and several projects that try to energize the rural, such as the rehabilitation of an old mill and the restoration of the bowling field, were promoted. The Santiago party was also recovered on July 25.

We return to our path and advance through a forest of oaks that takes us to a small wooden bridge to cross the Selmo River. From there, we can see the imposing Fervenza de Vieiros, which drops its water from a height of 20 meters, producing a soothing sound over the pond. A small path allows us to approach the right of the waterfall to see it from another perspective with more height. Another place that deserves a good stop that allows us to absorb all the magic of the place.

We leave the waterfall and reach the road. We will have to make a stretch of asphalt before reaching Ferramulín, located 807 meters high, already on the border with the province of León. We do not know the origin of its place name but it seems a mixture of Formigueiros iron with the different mills that existed and from which the neighborhood of Muín da Ponte still grinds. In a walk through its narrow streets we can see that medieval configuration that remains to this day: slate and wood are used in perfect harmony, as in the rest of the villages of the mountains.

But life in Ferramulín has never been easy. The reference hospital is one hour away and the nearest pharmacy half an hour away. From the winter snowfall, which causes the isolation of the village, to the continuous threat of exploitation of their wealth for the benefit of a few foreigners, its inhabitants are true survivors.

A way of being and a patience that is summed up by this little story. It is said that in 1995 the president of the Xunta, Manuel Fraga, approached Ferramulín to fish in his famous trout rivers. The matter of the mini-power plant was hot and an 80-year-old citizen approached him and told him that the river would stop giving fish if the mini-plant was built. The president replied: “My dear friend, there is nothing to do on the issue of mini-plants.” And the countryman replied: «Do what you want. What you build by day, I will throw at night. With my age, they will not put me in jail anymore. ”And it is this determination that led the neighbors to save the basins of the Selmo and Visuña rivers from a minicentral.

We leave Ferramulín by the bridge where the Selmo and Visuña rivers meet and we take direction to Visuña by the Camiño da Nova, a path that goes to the edge of the river and that was the communication route between these two places before the road was built, and through which the oxcarts that brought the iron ore from nearby Formigueiros and the wood of the large chestnut forests of Hórreos.

Taking advantage of this large amount of water, large pastures appear, where the cattle are at ease. After passing the Ponte da Ferrería we arrive at the ruins of the iron factory of Hórreos, which was in operation from the middle of the 18th century until the end of the 19th century, and of which today there are barely more remains than ruins of the annexed constructions. On the right, on the mountain, is the village of Hórreos. Curiously, neither in this village nor in the entire mountain range are the granaries, so typical of other areas of Galicia. The reason is clear, since they used the wooden corridors of the houses for the proper uses of these structures, such as the storage of cereal.

We arrive again at the Visuña River where the Fonte Grande is located, where the river resurfaces again after circulating through the subsoil for almost a kilometer from O Gorgollón.

Continuing parallel to the river we reach the village of Visuña, located 969 meters high at the foot of Mount Formigueiros, a great mining tradition and relationship with the neighboring region of Bierzo, since this was one of the natural roads to enter Galicia.

On the north slope is the 1278-meter Mount Cereixido, where there were some old mines from which lead and blenda were extracted, which was then transported to Reibarba, the first neighborhood we found on our way.

Very close to Reibarba is the Buraca das Choias, one of the most interesting caves of the Courel and the most diving due to its calcareous soil. In recent times, speleological expeditions have brought new findings that turn this cave into a whole box of surprises.

We continue our way through the valley crossing several bridges over river and rivers, visiting mills and admiring all the ethnographic treasures that we find each step through the neighborhoods of Aldea, Cima de Vila and Calella.

The Eirexa neighborhood has that name because there is the church dedicated to Santa Eufemia.

Céramo is the last of the neighborhoods that we are going to visit in Visuña. Located on the northeast face of Mount Formigueiros at 1120 meters high, it is called the white town with its characteristic limestone constructions. Here worked the «venaqueiros» who, in an artisanal and individual way, extracted the iron ore to supply all these iron factories that existed in ancient times.

Nearby is the Cova de Arcoia, another of the interesting caves of the Courel, with 1000 meters in length and 40 meters deep. In this cave, 2 bodies were found in 2009 that, surely, had been there for many decades. We remind you that visiting these caves is dangerous for those who do not know them and a permit from the Galician Federation of Speleology is necessary.

From Visuña we have two options to finish the stage that are divided into Eirexa and rejoin at the end, in the Alto de O Couto.

One, which indicates our path and the most difficult, ascends in 3 kilometers from the 1000 meters of Visuña to the Pico Formigueiros which, with its 1643 meters, is the summit of Courel.

The other alternative, simpler, proposes us from Visuña in slight ascent through the neighborhood of Céramo to Alto do Couto,

Here, in the Alto de O Couto, we conclude this penultimate stage by O Courel that has brought us closer to the most isolated villages in the mountains, to pure survival.