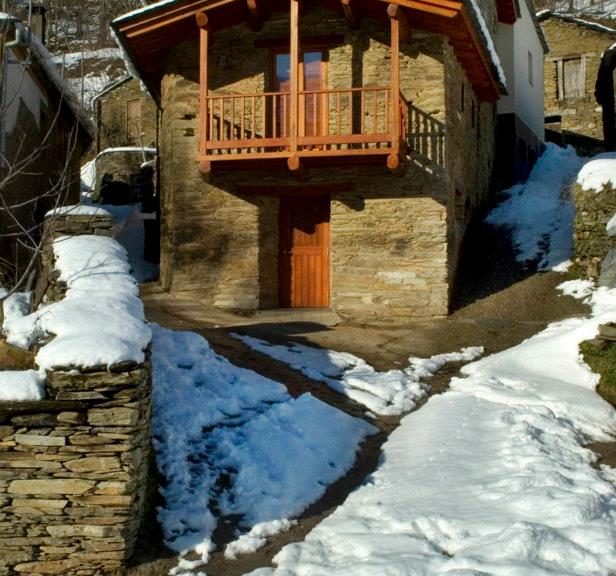 As Triegas and Casa Rodrigo are located in the medieval village of Paderne do Caurel. Their houses, very grouped, are built based on thick slab hunk walls and covered with irregular slate slabs forming shells that protect both homes and roads.

The view from the top is of a set of slate roofs that hide the urban complex. Just by opening the windows we will enjoy the beautiful views of the Devesa de Escrita and the mountains of Paderne.

As Triegas is a beautiful rural house, old stable, which has been skillfully restored to offer the comforts of everyday life in the 21st century, without prejudice to the rural environment to which it is linked and to which it belongs.

In As Triegas, stone and wood coexist as essential elements and it is perfectly integrated into its surroundings, not calling attention to the buildings that surround it if it is not for its size and its careful state. Its structure and exterior appearance have been respected, the interior being rebuilt to distribute the rooms according to the new needs.

The rural house As Triegas has six carefully maintained double rooms that can be rented separately. All of them have private bathroom and heating, which makes these rooms a comfortable and cozy space. One of the six rooms is adapted for people with reduced mobility. Some even have a large wooden balcony with views of the mountains.

The rural house As Triegas has a large common room of 47 m2 with fireplace and television. A cozy space where you can rest, read, talk or enjoy with the board games that we put at your disposal.

This old traditional house was the first house rehabilitated as a rural tourism establishment in Paderne do Courel, and it has included current design concepts that contrast nicely with the stone as the main element of the construction. It is a building independent of the others, located in the upper part of the town. Built, as is standard, based on masonry load walls and slate roof. It has two useful plants.

It has three double rooms with private bathroom each. The rooms have bed linen and towels.

Complete its facilities with:

Our dishes are based on the traditional food of the Caurel, imposed by the land itself and the hardness of the work in the field. They are all made with natural and homemade foods, which could be said organic, in the most etymological sense of the word, since we still work the garden and have cattle, pig and poultry. We have a wood oven to make our own bread and you can not miss our exquisite chard and sausage empanada.

Strong breakfasts for the hiker
Homemade bread toast.
Butter (or margarine) and jam made with the fruit of our orchards, apple, strawberry, plum, peach …
Milk (also without lactose and vegetable), coffee or infusion.
Fruit according to season.

Although we are in an area where meat is a main dish, we have vegetarian or vegan people present, so in our restaurant we include dishes specially designed for them. With all our love we make vegetable empanadas, varied salads (with legumes, couscous, nuts …) creams and soups of vegetables, legumes, rice and pasta with vegetables and desserts for vegans that do not include anything of animal origin.