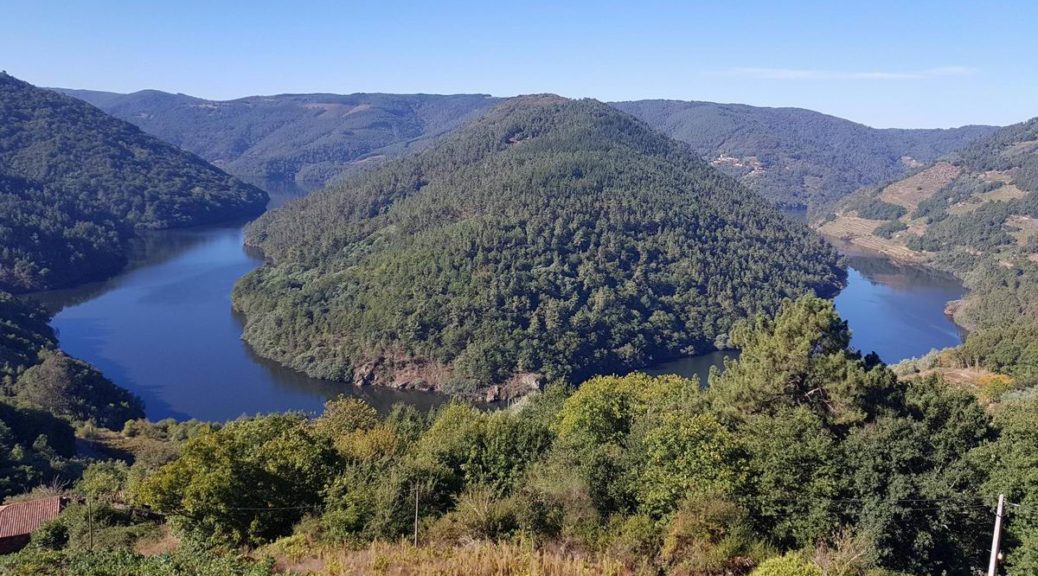 We begin this trail along the Ribeira Sacra with a stage along the Miño River, with a great variety of landscapes and in which we will see its most characteristic elements: the Romanesque of its churches, the viewpoints over the river, and the vineyards planted on its slopes and wineries. We will walk through typical villages and, going through the middle of their vines. We will be already integrated in the landscape amazed by that viticulture this heroic viticulture practiced by its people. Thus we will arrive at Cabo do Mundo, spectacular meander and one of the panoramic views of the area.

This trail along the Ribeira Sacra is a continuous forest bath, full of centuries-old chestnut trees and vineyard terraces. All this intermingled with small Romanesque jewels, ancient millenary churches that have survived the passage of time and that are concentrated in a very special way in this region.

This first stage begins in the Church of de San Paio de Diomondi. San Paio is a ninth-century martyr, of Galician origin, who was beheaded in Córdoba by order of Abderramán. Although the tympanum of the main cover is reflected in the year 1170, the first written references are from the eighth century, being one of the main examples of Romanesque compostelano. In 1931 it was declared a National Monument. The church is of a single nave with apse of semicircular head. In the facade it presents three arches, the central one bigger than the lateral ones that are blind. On the cover, four archivolts supported by marble columns and capitals decorated with animal heads.

Attached to the temple we have the Episcopal Building, former summer house of the bishops of Lugo until the 19th century, which partially collapsed, ruining part of the fifteenth-century facade. It is said that the famous Bishop Odario (8th century) spent the last years of his life here.

We left Diomondi on the road to Belesar along a path between chestnut and oak forests, forming the typical “carriozas” well defined by stone walls covered with a permanent moss. Here also passes the Camino de Invierno, which arrives in Santiago avoiding the snowy peaks of Cebreiro.

That these lands have been inhabited since time immemorial is something that will tell us the route itself and that we begin to see in the remains of the Roman Secondary Road that we find in the descent, with three large curves that are known as the Codos de Belesar (elbows).

From there the descent is more pronounced and the oaks disappear, giving way to the first vineyards of our route. We already begin to have a panoramic view of Belesar and its pier that we will reach in a few minutes.

Belesar is a beautiful and typical village of this Ribeira Sacra do Miño, encased between its slopes that are domesticated to form the terraces (socalcos) where to plant the vines. This heroic viticulture, where machinery does not enter and where daily work is very similar to the Roman era, is a concept that we are going to find throughout the route.

On the walk we admire its stone houses and galleries. In the Fluvial Club there is a restaurant and from there the catamaran goes to Os Peares in high season.

The Belesar Reservoir, built in 1963 to supply a hydroelectric power station, changed the lives of its inhabitants completely, submerging entire villages such as Portomarín and part of Belesar. The current bridge is modern, being for a long time the main access between the regions of Lemos and Chantada. The ancient one, from Roman times, rests peacefully under the waters of the reservoir.

The route continues along this margin of the river but, on the other side of the bridge, the Peto de Ánimas de San Bartolomé, built in the 17th century, is another clear example of our material and intangible wealth. These simple stone monuments, widespread in Galicia, are for the cult of the dead and associated with the idea of purgatory. They are usually found at crossroads or near churches. Its purpose is to offer alms of all kinds to the souls of Purgatory, being its temporary punishment and thus being able to reach Heaven. In compensation, once released they will intercede for those who made the offerings. Alms were not strictly monetary, they could also be agricultural products.

Nearby is the Church of San Bartolomé, erected in this place in the mid-twentieth century replacing the old one, which is also under water.

From here begins a road surrounded by the plantations of vines that, in these lands of the heart of Galicia and with these climatic conditions, produce a real delicacy that is increasingly recognized outside our borders.

In the ascent it is worth stopping every so often, turn around and contemplate the landscape. Thus we arrived at Bexán, which constitutes an excellent natural viewpoint over the Miño River. We cross the village through its only street contemplating its Chapel of San Antonio, built in 1639, and the old stone houses, now abandoned. We imagined the lifestyle in these small towns years ago, producing wine in small wineries attached to the vineyards and that was transported for sale by mules, stored inside animal skins.

We continue our trail through thick carballeiras and the villages of Millarada and O Torno. In the part of the slope of the river oriented to the north there are no vineyards since the hours of sun are minimum. In them there are planted large chestnut and oak forests that help retain moisture and create a microclimate suitable for plantations. On the other side of the Miño we can see the village of Pousadoiro and the Ponte de Portotide.

The Abadía da Cova is one of the reference wineries of the Ribeira Sacra denomination. Located in an exceptional environment in one of the most spectacular meanders of the Miño River, it is a must stop at our stage.

Let’s know his story. Baldomero Moure, an emigrant to Cuba in love with the wines of this area, and his wife, Carmen Pérez, begin in the early 20s to group the existing small vineyards, the result of such deep-rooted minifundismo in Galicia, to turn them into vineyards and begin to market their first wines. These wines would be sold in bulk and locally, due to the historical moment in the area, which made it impossible to sell bottled wines. At the same time, with the remains of those vinifications, the first pomace begins to be distilled, Baldomero acquiring its first tar and, years later, a still.

José Moure was born from this marriage, “Pepe de Cuñas”, who will be with his wife Ana Vázquez, the founders of Adegas Moure in 1958. In the fifties, this young entrepreneur made and bottled his first pomace, even before the wines, taking advantage of the reputation of being a great distiller. In the spring of 1963, the methyl case plunged other spirits producers into the most important alcohol crisis in Spain. This issue positions José in an advantageous situation thanks to the health and quality of his product. The founder decides, already in those times, to obtain the excellence of his spirits, using only the best raw material, and making the first distillates of the area with a good separation of its components to achieve the most satisfactory product.

Knowing the exceptional conditions for its cultivation in its terraces, it uses the Albariña grape and is a pioneer in valuing this wine that ends up becoming the Ribeira Sacra denomination.

In the 80s, the third generation has just given the final push both in its quality, improving cultivation and winemaking techniques, as in its promotion and commercialization.

In 2004, the current winemaking winery for young wines, laboratory and a micro vinification winery were built, where the R + D + i projects were developed. At present, the company continues its growth process consolidating itself as an innovative entity and a reference within the Ribeira Sacra, obtaining numerous awards and recognitions

We leave the winery to reach one of the best known viewpoints: O Cabo do Mundo, impressive viewpoint on the meander that the Miño River makes to border Mount Navallo. A geological wonder, place of forced stop and moment of relaxation, while we contemplate the terraces of the vineyards that occupy the canyon.

In this place of Priorato, in this environment on the Miño River of great tranquility and landscape richness, the Igrexa de San Martiño da Cova is located, which has its origin in an Augustinian monastery of the 12th century and which later became Priory dependent on the Lugo Cathedral. The church is of a single ship covered with wood, which ends in a semicircular apse. On the facade stands the cover with a semicircular arch with archivolts supported by columns. Above it the belfry, built in the eighteenth century, which houses the double bell tower. Inside, we can see two baroque altarpieces and several paintings from the 19th century.

From O Priorato we descend to Praia da Cova, a place to relax on these banks of the Miño. In this beautiful river beach we have the possibility to rent kayaks and the services of a modern restaurant. Here, in this place, we finish this stage that shows the Ribeira Sacra of the Miño River.